Never more real and vivid than when recollected in the imagination.

We are our memories.

And, our memories, particularly those which carry the most emotional charge, are constantly being selected, edited and recast.

The stream of memory is never stilled.

The genesis of a song, a poem, a story or a painting begins in an insistent whisper from the memory.

A whisper which cannot be ignored.

Such a whisper was heard in the 1930s by Jack McAuliffe from Lixnaw in County Kerry as he sat sat in a cottage near Dooneen Point.

In response he wrote a poem that became the ballad, ‘The Cliffs of Dooneen’.

The key duty of an creative artist is to closely attend to those whispers and make them real in words on the page, notes in the air or brush marks on the canvas.

You may not be able to see Kilrush and Kilkee form the Cliffs of Dooneen with the naked eye but I defy anyone alive not to see them, clear as the light of dawn, in the mind’s eye when conjured up with lyrical tenderness by Christy Moore and Planxty (featuring the heart piercing piping of Liam O’Flynn)

So too the trembling hare and the lofty pheasants making homes for their young.

And, whoever you are, wherever you are, however far you have traveled from your own native home far away from the mountains and away over the foam you will have within you memories of all the kind people you have left behind.

In the quiet watches of your dreams you will bathe in the streams and the meadows of your youth.

And, when you hear, ‘The Cliffs of Dooneen’ you will find yourself singing along with a full heart and tears in your eyes.

‘You may travel far far from your own native home

But of all the fine places that I’ve ever seen,

There’s none to compare with The Cliffs of Dooneen

The towns of Kilrush and Kilkee can be seen

From the high rocky slopes at The Cliffs of Dooneen

Watching all the wild flowers that ne’er do decay

The hare and lofty pheasant are plain to be seen

Making homes for their young round The Cliffs of Dooneen

And to all the fine people I’m leaving behind

To the streams and the meadows where late I have been

And the high rocky slopes of The Cliffs of Dooneen’ 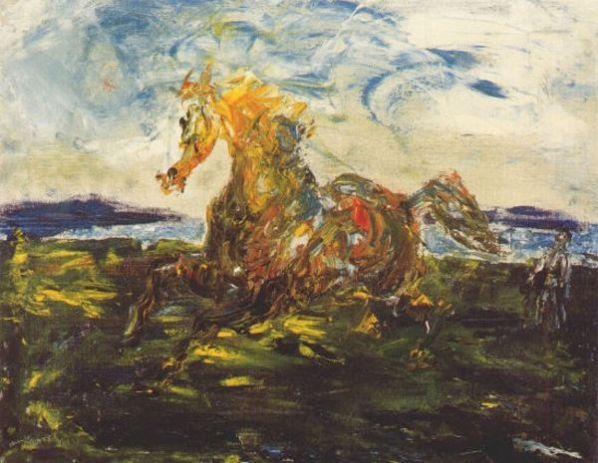 We return to the theme of The Horse in Irish culture.

I have seen many thousands of horses in my life yet I have never seen a horse so thrillingly, mystically, alive as the horse in Jack B Yeats painting above.