A Parade of Posts for St Patrick 3

A Song by Ger Wolfe

A Painting by Paul Kelly

Today a farewell homage to one of Ireland’s most treasured Poets – Richard Murphy and what I am sure for many of you will be an introduction to a singer/songwriter particularly close to my own heart, Ger Wolfe, whose stature as an artist has not yet been properly reflected in popular awareness.

The painting today is by a contemporary Irish Artist, Paul Kelly, whose landscapes of County Dublin cast a spell.

You can explore his work further at http://www.paulkellyart.ie

Ger Wolfe in ‘The Curra Road’ has written a song that beautifully captures the sense of being at home and at peace in the physical, emotional and spiritual landscape of Home.

The hallowed Home we always want to carry within us as we walk down other roads on our pilgrimage through Life..

The Curra Road is undoubtedly a classic Irish Song and its luminous lyricism is entirely characteristic of Ger Wolfe’s catalogue.

I heard a story the other day that Bob Dylan would test out the compatibility of prospective musicians by asking, sotto voce, do you know, ‘Pretty Peggy-O’?

If the answer was Yes and they could follow and augment Bob’s version they were hired!

I have the same sort of test for anyone who considers themselves well informed on Irish Music – Do you know, ‘The Curra Road’?

If the answer is Yes I’m up to the Bar to buy them a pint – content there will lots to talk about that evening!

Past the cattle at their grazing
Through the woods of hazel, holly, birch and oak
Past the robin on the gatepost
Singing to the bluebells, sunlight is their host
We won’t worry about the radio
Worry about the traffic, worry about the phone
In the summer we’ll go laughing
Way down to the river down the dusty road

There is music in the river
Listen to it dancing underneath the bridge
And the wind is hardly breathing
Words onto the willow branches overhead
We won’t worry about the government
Worry about the video, worry about the day
In the summer we’ll go waltzing
Hand in hand together down the dusty way

You can’t go wrong with any of his CDs – my favourites are, ‘I Have Been Loved’, ‘No Bird Sang’ and, ‘The Ragged Ground’.

I’m eagerly anticipating a forthcoming compilation, ‘The Lark Of Mayfield’.

Richard Murphy, who died at the end of January this year, had tremendous poetic gifts and a capacity for disciplined hard work at his craft over many decades.

His collection, ‘The Pleasure Ground: Poems 1952-2012’ (Lilliput Press) is a must-have for anyone interested in modern Irish Poetry.

Murphy had deep feeling for the Irish landscape and the Seas around The Island (and its offshore Islands).

There is a profound physicality present in his verse which makes responding to his work an uplifting whole-body experience..

I have always been particularly impressed by his ability to make history come alive in verse especially through long narratives allowing for exposition, diversions and deliberation.

Reading Richard Murphy will open up new imaginative territory and offer revelatory perspectives on the worlds we imagined we knew well.

SAILING TO AN ISLAND

The boom above my knees lifts, and the boat
Drops, and the surge departs, departs, my cheek
Kissed and rejected, kissed, as the gaff sways
A tangent, cuts the infinite sky to red
Maps, and the mast draws eight and eight across
Measureless blue, the boatmen sing or sleep.

We point all day for our chosen island,
Clare, with its crags purpled by legend:
There under castles the hot O’Malleys,
Daughters of Granuaile, the pirate queen
Who boarded a Turk with a blunderbuss,
Comb red hair and assemble cattle.
Across the shelved Atlantic groundswell
Plumbed by the sun’s kingfisher rod,
We sail to locate in sea, earth and stone
The myth of a shrewd and brutal swordswoman
Who piously endowed an abbey.
Seven hours we try against wind and tide,
Tack and return, making no headway.
The north wind sticks like a gag in our teeth.

Encased in a mirage, steam on the water,
Loosely we coast where hideous rocks jag,
An acropolis of cormorants, an extinct
Volcano where spiders spin, a purgatory
Guarded by hags and bristled with breakers.

The breeze as we plunge slowly stiffens:
There are hills of sea between us and land,
Between our hopes and the island harbour.
A child vomits. The boat veers and bucks.
There is no refuge on the gannet’s cliff.
We are far, far out: the hull is rotten,
The spars are splitting, the rigging is frayed,
And our helmsman laughs uncautiously.

What of those who must earn their living
On the ribald face of a mad mistress?
We in holiday fashion know
This is the boat that belched its crew
Dead on the shingle in the Cleggan disaster.

Now she dips, and the sail hits the water.
She luffs to a squall; is struck; and shudders.
Someone is shouting. The boom, weak as scissors,
Has snapped. The boatman is praying.
Orders thunder and canvas cannodades.
She smothers in spray. We still have a mast;
The oar makes a boom. I am told to cut
Cords out of fishing-lines, fasten the jib.
Ropes lash my cheeks. Ease! Ease at last:
She wings to leeward, we can safely run.
Washed over rails our Clare Island dreams,
With storm behind us we straddle the wakeful
Waters that draw us headfast to Inishbofin.

The bows rock as she overtakes the surge.
We neither sleep nor sing nor talk,
But look to the land where the men are mowing.
What will the islanders think of our folly?

The whispering spontaneous reception committee
Nods and smokes by the calm jetty.
Am I jealous of these courteous fishermen
Who hand us ashore, for knowing the sea
Intimately, for respecting the storm
That took nine of their men on one bad night
And five from Rossadillisk in this very boat?
Their harbour is sheltered. They are slow to tell
The story again. There is local pride
In their home-built ships.
We are advised to return next day by the mail.

But tonight we stay, drinking with people
Happy in the monotony of boats,
Bringing the catch to the Cleggan market,
Cultivating fields, or retiring from America
With enough to soak till morning or old age.

The bench below my knees lifts, and the floor
Drops, and words depart, depart, with faces
Blurred by the smoke. An old man grips my arm,
His shot eyes twitch, quietly dissatisfied.
Ha has lost his watch, an American gold
From Boston gas-works. He treats the company
To the secretive surge, the sea of his sadness.
I slip outside, fall among stones and nettles,
Crackling dry twigs on an elder tree,
While an accordion drones above the hill.

Later, I reach a room, where the moon stares
Through a cobwebbed window. The tide has ebbed,
Boats are careened in the harbour. Here is a bed. 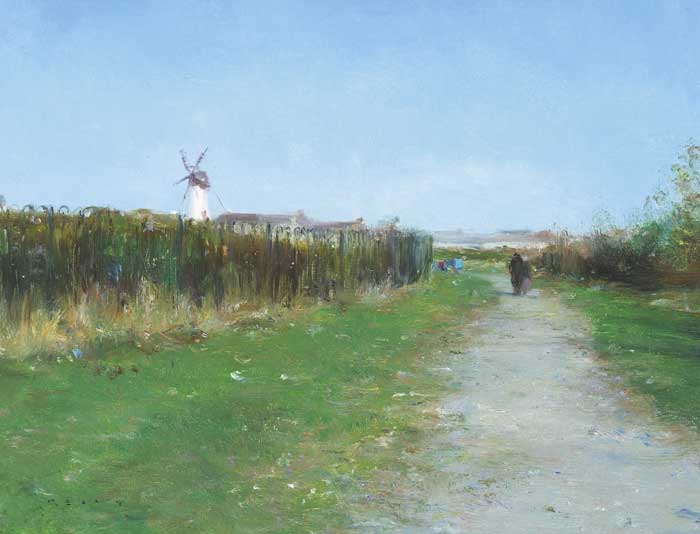 Concerned mostly with alternative music from the 1980s and 1990s, much of it Irish and much of it long lost. Somewhat addictive!

The site of Vincent Hanley whose love and understanding of Irish Literature makes his Blog  a delight to read.

Visiting these sites will be well worth your while and do mention The Immortal Jukebox when you do.