Giorgione, a Venetian artist from the period of the High Renaissance, remains a figure of intense mystery. 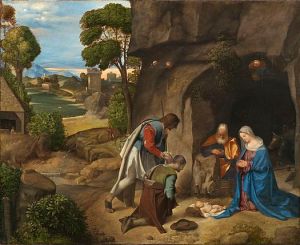 What we can say from his, ‘The Adoration of the Shepherds’ (NGA Washington) is that he could suspend time and evoke awe and silent wonder.

This painting offers us a profound sense of reverence. The Nativity tableau shows Mary communing with her child as both motherly protector and prayerful worshiper.

Joseph, so often the forgotten man of the narrative, seems overwhelmed by the enormity and mystery of the events he has been caught up in.

Shepherds were ill-regarded outsiders in biblical times. Yet, it was they who were granted the blessing of an audience with the new born King.

This must be some new type of King who welcomes first the poor and the ragged before the rich and high born.

The sight greeting the Shepherds was beyond words.

Their attitude of humble surrender to an experience beyond their understanding is intensely moving.

Our contemplative music today comes from the Hebrides.

The Christ Child’s Lullaby or Taladh Chriosda in Scots Gaelic is full to the brim with maternal feeling for the vulnerable new born.

Mother and child, once one, now two, create together a sacred space where love and mutual regard dwells.

The standing stone vocals of Mae McKenna and Mairi Macinnes, switching fluently between languages, supported by the pellucid instrumental playing of William Jackson and Tony McManus casts a timeless spell.

Our Sleigh cuts a deep track through the falling snow as it’s carrying a whole heap of presents for all the good boys and girls all around the world (the list has been checked twice and we surely know who has been naughty and who has been nice).

Our first song is, ‘Old Toy Trains’ by the one and only Roger Miller. He wrote a hatful of hit songs, was a multiple Grammy winner and admitted to the Country Music Hall Of Fame.

In addition he also had a theatrical Tony Award in his trophy cabinet for his score for the hit Broadway musical, ‘Big River’ which he based on the writings of Mark Twain.

Despite all the above he has always seemed to be to be under rated with many damning him with the faint praise of describing him as a writer of, ‘Novelty Songs’.

Certainly there is humour in his songs but as anyone who is any kind of honest writer will tell you it is much harder to write comedy than it is to write tragedy.

The key to understanding Miller’s very real eminence as a songwriter lies in the sharpness of his observations expressed in language that is simple in nature but complex in impact.

Roger Miller had a poor upbringing but as he said words became his toys and you can feel that in the playfulness and delight with which he uses the resources of the American language as spoken by the everyday working man and woman.

Roger Miller liked people and liked telling stories that would resonate with their common experiences. Listening to him you do feel spoken to by a ruminative and intelligent man who has seen enough of life to be slow to judge and quick to smile.

There’s often a metaphorical raised eyebrow in the tone of his language and vocals but never a raised fist.

‘Old Toy Trains’ is a simple song that catches the magic of Christmas Eve – a magic that it is easy to lose or forget as we grow in supposed sophistication. Miller taps into the time- suspended feeling as we approach a great event and the hope we all have that all will be calm and all will be well.

Most of us will look back on a present we received when we were young children and reflect that no later gift has ever so perfectly matched our dreams than the toy train, drum, doll (or in my case) a cowboy outfit we received and cherished all those years ago.

Today’s poem extract comes from, ‘Christmas Day’ by Christopher Smart – an 18th Century English poet who pursued his vocation steadfastly despite spells in an asylum and prison.

‘Spinks and ouzles sing sublimely,
We too have a saviour born,
Whiter blossoms burst untimely
On the blest Mosaic thorn

God all-bounteous, all-creative,
Whom no ills from good dissuade,
Is incarnate and a native
Of the very world he made.’