‘… I like Morrison because I know that his work comes from the same level as my own poetry – the level of daydreaming; that he’s out to annihilate ego; that he’s after the same,’nothingness’ as Kavanagh was after ….’ (Paul Durcan)

Van Morrison is an only child. A child alone much of the time by inclination and perhaps vocation. A soul born to dream, to live in dreams and to birth those dreams in songs and singing – dreaming in God.

As a boy growing up in East Belfast he was close to the sea and the countryside. From his house, beyond his bedroom, he could hear voices echoing over the Beechie River and imagine the mist swathed shipyard towers looming out of the night as the foghorns guided ships safely home.

His head, heart and spirit opened up and welcomed dreams and intimations of an immortal world coexisting with the mortal world. Walking down Hyndford Street to leafy Cyprus Avenue he could be transported so that he was both thrillingly outside himself and strangely never so completely himself.

Dreaming those young man’s dreams he found sustenance for his creative imagination in the sights and sounds of his home city, its hinterland, and in sounds closer to home emanating from the radio and the HMV record player. The radio and the record player would become almost sacred objects.

The sounds they produced would enter deep into his consciousness, his soul; sounds he could never forget, sounds he would store as treasure and draw on for decades – fusing them through the mysterious alchemy of art into extraordinarily beautiful and affecting visions of his own.

And these visions have their genesis in the days before Rock ‘n’ Roll. The days of post war austerity. Days which could seem monochrome, mundane and stultifyingly metronomic. Days when a dreaming boy hunched close to the radio and the record player in search of a rainbow for his soul.

Together with fellow Irishman and fellow dreamer, poet Paul Durcan, he would dramatise those dreaming days in a song, ‘In The Days Before Rock ‘n’ Roll’ – a song which would catalogue some of the signposts of those dreams in a performance which has something of the hyper real, time slipping, giddy character of a waking dream. A performance which has me laughing out loud and punching the air with Joy as he hymns the stations and the musicians that called to him – that called his own unique voice into being.

‘In the Days’ is a dream that’s shot through with good humour, strangeness and charm. A dream that flows like a pure mountain stream strong enough to cut through stone yet gentle enough to dip your hand in. A stream you would surely want to let the goldfish go into!

A dream brought to vivid life over four days in the studio by an intimate quartet – Paul Durcan as the inspired/crazed narrator, Dave Early on drums, Steve Pearce on bass with Van Morrison on animating spirit, piano and vocals.

The sleeve notes tell me the song last 8 minutes and 13 seconds but that only records how long it lasts the first time you hear it – for once you’ve heard it it will be playing in your imagination and in your dreams for the rest of your life. Come aboard! 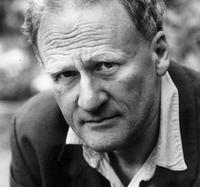 Reading a Durcan collection is to be taken on a thrilling literary roller coaster ride which will have you laughing and gasping as well as exhilarated and emotionally pummelled. He is a performance poet on the page as well as the stage addressing his audience as friends and fellow campfire sitters as he examines the crazy world we live in. He seems to me to be wholly mad and wholly sane simultaneously – ideal territory for a poet to occupy.

Who is Justin? Just a name plucked out of the air for its sound, its comparative rarity in a world awash with Jims and Georges and Pauls? Probably we will never know who this, ‘gentler than a man’ man was. Just a thought but it strikes me as not insignificant that an Irish poet from the latter half of the twentieth century would use a name which happens to be the little know second name of the greatest Irish poet of that era: Seamus Justin Heaney!

Vintage radios such as those made by the Telefunken Company in Berlin were gorgeously tactile objects. Radios, humming with valve power and gleaming with polished wood, bakelite and glass, softly lit, took pride of place in our homes in the days before Televisions took up their imperial dominance in our living rooms. No point and shoot remotes then! Radios were switched on and off and tuned to stations using knobs that clunked satisfyingly into position and dials that you set spinning to call up and capture sounds from distant lands beamed in from the ionosphere.

The very air crackled with possibility as you waited for the signal to settle as you settled down to laugh along your favourite comedians, sing along with your favourite singers, gasp at the heroics of your favourite detective or be amazed by a discovery as the spinning dial led you into imaginative territory you had never dreamed existed.

Radios conjured up dreams, created communities of interest and painted pictures that seared into our memories. Radio, despite all the technological developments of the last few decades remains the dreamers ideal companion. Tune in!

‘I am searching for … Luxembourg, Athlone, Budapest, AFN, Hilversum, Helvetia …’

One of the great pleasures of vintage radio was discovering what programmes were made by exotically named radio stations broadcasting from places which often had to be looked up on an atlas to see where they were! Not knowing what you might find and be introduced to was exciting and expanded our cultural horizons.

I’ll take spinning the dial over preset culture any day of the week: only listening to what you already know you like narrows your horizons and precludes the revolutionary discoveries that open up new worlds.

As you scanned the stations on the radio dial even reciting their names became a form of litany – clearly recognised above by Paul Durcan who has a genius for incantatory recitation.

Radio Luxembourg had a very powerful signal (on 208 metres Medium Wave) which washed tidally over the British Isles bringing many young people their first regular exposure to those new fangled musics their parents just knew were no good for them. Luxembourg, in contrast to the BBC, was a commercial station which meant it was happy to devote whole programmes to showcasing the new releases from record labels such as Capitol and Phillips.

On Saturdays at 8pm in 1956 (when Van was aged 11) you could listen to, ‘Jamboree’ – described as two hours of non-stop, action packed radio featuring ‘Teenage Jury’ and American disc-jockey Alan Freed with an excerpt from his world changing show, ‘Rock ‘n’ Roll’.

Athlone is a historic Irish town on the shores of the River Shannon. From the 1930s to the 1970s the principal transmitter for Irish radio was located in Athlone and the Irish national radio station came to be known on radio dials all over the world as Athlone. The fledgling Irish state was keen to promote native culture with Irish sports and traditional music being prominently featured.

Athlone is also the birthplace of the great Irish tenor Count John McCormack whose golden voice resounded all over the globe in the first half of the twentieth century.

Like Van he had a voice that was able to express the normally inexpressible – a voice that could send shivers through the soul.

One of the spin-offs from the presence of GIs in Europe as a result of WW2 and the ensuing cold war was AFN whose broadcasts of American music could be listened to by Europeans hungry for the jazz and blues based music which was so hard to find anywhere else. Being near an American military base was a boon both for the likely strength of the signal and the possibility that personnel from the base might have records never seen in domestic stores.

Lester Piggott (‘The long fellow’) was, as my Dad would have told you, the greatest horse racing jockey who ever lived. He won England’s premier race, The Epsom Derby, an almost unbelievable 9 times from 1954 as a teenager with, ‘Never Say Die’ through to 1983 when he won with, ‘Teenoso’. Lester Piggott became an almost mythical figure not just in the world of the turf but in the folklore of the nation.

Children and grandmothers who never opened a racing page in their lives would go into a bookmakers on the day of a classic race and simply say, ‘I’ll have five shillings on whatever Lester is riding!’ And, very, very often that turned out to be a very smart bet for no one was a better judge of what horse to ride than Lester Piggott and no one more capable of riding a race with ice cool expertise to ensure victory. Lester was a close mouthed man with a very dry sense of humour – he had no time for the hoopla of celebrity. He he lived to win horse races and he spoke horse with a fluency that’s probably never been matched.

Van Morrison was extraordinarily fortunate to be the son of a father who had lived in Detroit and who had a fabled collection of blues and Rhythm & Blues records young Van could immerse his thirsty soul in. As he says he heard Muddy Waters and Blind Lemon on the street where he was born. Leadbelly became his guiding spirit. A spirit he has remained true to over five decades and more of music making.

The radio brought to him and millions of others the original Rock ‘n’ Roll creators – the revolutionaries whose legacy will live for ever. The greater the distance we are from those giants of the 1950s the greater their genius is clear. They were the guides and spirits who befriended us – who turned on the coloured lights for whole generations. Their genius is lovingly celebrated in the roll call here to form an honours board of immortality.

There can be no doubt that Van Morrison has joined that company.

As the song fades back into the ether a transported Paul Durcan says:

‘We certainly got a lot of beautiful things in there Van’.

Thanks to Kerry Shale for suggesting the topic of this post. For those of you who may not be familiar with the name Kerry is a multi-talented actor, writer and voice over artist. He also, obviously, has great musical taste!