Come fill to me the parting glass

Goodnight and joy be with you all.

Hard to admit but the only page in the newspaper that I always read is the Obituaries.

I frequently discover histories of fascinating people I surely should have known about who led lives of extraordinary achievement and colour.

Of course, the older I get the more I realise that there are no such things as ‘ordinary lives’ for every life contains miracles and marvels if we but took the time to hear all those unrehearsed and untold stories.

Perhaps God alone performs that service for us.

I also frequently find myself strongly disagreeing with the perspective of professional obituarists when they memorialise the lives of men and women whose lives I actually knew something about or who had an emotional impact on my own life through their work or character.

The Parting Glass will be a strictly amateur enterprise with few dates, lists of honours or details of former spouses.

Instead The Parting Glass will be the reaction of someone who reacts to a particular death with a sense of loss and a desire to celebrate with wonder how lives near and distant in place and time can resonate and echo with my own.

From his father he inherited a taste for the bottle and from his mother the hope of salvation.

The world and his own nature offered up the simultaneous allure and spectre of sin, guilt and damnation.

From some higher power he was blessed with a singing voice that could express with enormous authority and impact the whole damn bone and blood gamut of emotions we’re all forever chained and in thrall to throughout our lives. 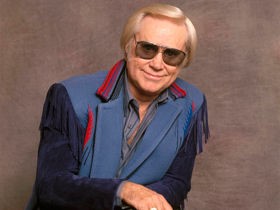 A voice that was never unrestrained even when plumbing unfathomable depths of pain and loss.

George’s voice had to be controlled even under the most crushing spiritual and emotional pressure because it was his, and our, final defence against defeat, depression and madness.

Sing one for me George!

George could sing gospel with a repentant sinner’s fervour and in his youth with the tempo cranked up to hot rod levels he could almost sound like a rockabilly singer.

But, he lived and died as the greatest country honkytonk balladeer who ever lived.

If you want your heart pummelled and wrenched (and sooner or later we all do) no-one can perform emotional/emergency cardiac surgery like good ol’ George.

I won’t list all the hits – there are several fine compilations, easily available, where you can soak yourself in his genius for mining and assuaging in song the travails, tragedies and travesties of life, love and death.

What more do you want?

Take a few minutes now to listen to ‘He Stopped Loving Her Today’.

When George recorded this he was a wreck of a man almost destroyed through drink and dissolution.

The writers, Bobby Braddock and Curly Putnam, gifted him a morbid son of a bitch of a song that needed a singer who could emotionally outstare the tragic story of a life stalled for decades because of lost chances and lost love.

A life only released from the stasis of loneliness and pain by the release of death.

George was more than equal to the challenge.  He was well acquainted with loss and he knew what it was to be half crazy.

Knowing this as a man helped the artist to sing the song with startling tenderness – with the tone of a man who has been so blasted by the storms that have assailed him that he has surrendered all his rage to accept gratefully the consolations of bare humanity.

Hear the dignity he gives to the wonderful line ‘All dressed up to go away’ describing the funeral bound body of the song’s protagonist.

Hear how he allows the swelling instrumentation of the chorus to lift him as he reveals with power but without undue drama why, finally, the man at the centre of the song has stopped loving her today.

Not many really deserve to have angels sing them to their rest.  For the rest of us we could do no better than settle for the immortal tones of the sinner’s friend – George Jones.

34 thoughts on “The Parting Glass: George Jones RIP – All Dressed Up To Go Away”